The French Bulldog sports a very short and smooth coat that should be fine to the touch, to a certain degree. This breed does not require much grooming, but under the folds of skin should be regularly cleaned.

The French Bulldog has a very even and pleasant temperament, which makes him a perfect candidate for a household companion. French Bulldogs are very playful, yet some males may be dog aggressive. This breed gets along well with most other animals, and does best with older children.

This hilarious little dog makes a wonderful playmate and is very affectionate. Alert and clingy, this breed does require lots of human attention to thrive. This is not a kennel breed and should always be kept in a family environment. Given proper socialization the French Bulldog can do well with other dogs, but should not be around small children, as they do not tolerate rough play.

This breed is an average shedder and does not need much grooming. Brushing with a rubber brush will remove any dead or loose hair. Due to the flat muzzle, the French Bulldog tends to drool so the mouth should be cleaned regularly. Bathe only when necessary.

The French Bulldog can easily become overheated due to the flat muzzle and breathing problems during extreme temperatures. Proper shade and water should always be provided. Not recommended for outdoor life. Do not exercise this breed in hot weather as this can cause heatstroke. If it's too hot outdoors, move your exercise and play indoors to prevent complications.

The life expectancy of the French Bulldog is around 10-12 years, and there are a number of health problems that are linked to this breed. The short muzzle of the breed means that over exertion can lead to respiratory problems, and they can be very sensitive to extreme temperatures, both hot and cold. Other issues to look out for include HD and elbow dysplasia, elongated soft palate, spinal problems, luxating patella, cataracts, allergies, and thyroid problems. The parents of the French Bulldog puppy should have OFA and CERF certificates, and screening for vWD should also be carried out. 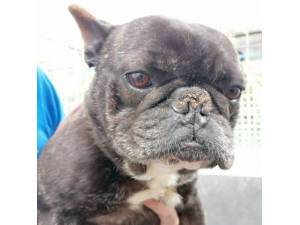 17-06-2022 Helly is a young and friendly girl who has come to us from a breeder. She is a quiet girl who is quite confident and will walk right up to you when you go in her kennel. Helly already knows 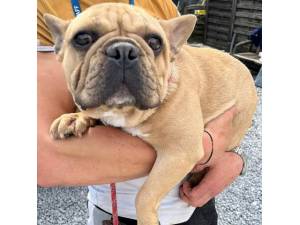 14-07-2022 Chilly has come to us from a breeder. She is a scared girl who hides in the back of her her kennel but is doing her best to be brave and will wag her tail when you speak gentle to her. Chil 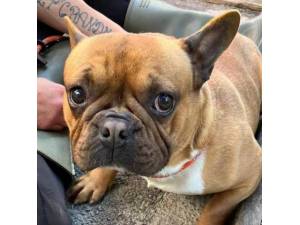 03-06-22 Delph has come to us from a breeder to find his forever home. He is a friendly boy but is a lot more worried than his kennel friends. Delph will need a home where there is another kind dog wh 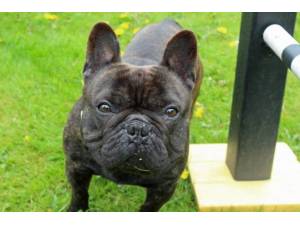 Reggie came to us as he wasn't getting along with the other dog in the home but he's actually quite a complex little chap. He can be very affectionate when he's comfortable with you, and likes to lean 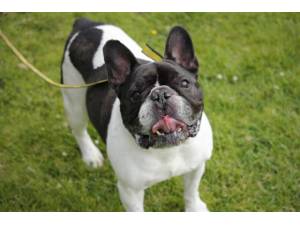 Boss is a 9 year old French Bulldog cross English Bulldog. He is a friendly boy and loves life. Boss loves his walks and especially down to the beach where he enjoys a swim. He does need more socialis