The Harrier coat is glossy, hard, dense, and short. The hair on the ears is finer in texture than on the body. The Harrier breed is an average shedder.

Originating in England during the 13th century, the Harrier breed was developed to hunt hare in packs. They were also used to hunt fox and rabbit, and were commonly referred to as the "poor man's foxhound". During the 17th and 18th century the Harrier breed was kept by aristocracy due to their ability to run with mounted hunters. The Harrier has a long history of popularity in England, but is still relatively rare in the United States.

The Harrier breed is tolerant, good-natured, and cheerful. As a pack dog they get along well with other dogs but are not recommended for homes with non-canine pets. They do well with children. The Harrier will become destructive and bay or howl incessantly if bored or lonely. They are very sociable, but typically bond more closely to other dogs than they do to people. Harrier's are often reserved with strangers.

The Harrier requires a minimal amount of grooming. Regular brushing to remove loose and dead hair is required. Bathing should be done when necessary. It is important to check the ears, paw pads, and nails regularly. Harrier's are prone to cataracts, hypothyroidism, and hip dysplasia.

The Harrier breed is not recommended for apartment or city living. They require an inordinate amount of exercise, interaction, and stimulation. They do best in a rural setting with plenty of room to roam.

The life expectancy of the Harrier is around 10-12 years. This is a relatively hardy and healthy breed, but there are a few health problems that have been linked to the breed. This includes lens luxation, epilepsy, PRA, and HD. The parents of the Harrier puppy should have OFA and CERF certificates. 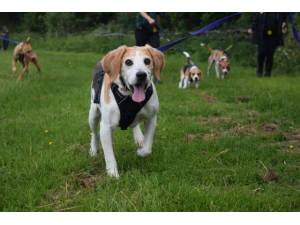 Vinny is a nervous boy who finds the world overwhelming. He loves the company of other dogs and needs to live in a multi dog household. He could be rehomed with his best friend Jasper. He is happiest 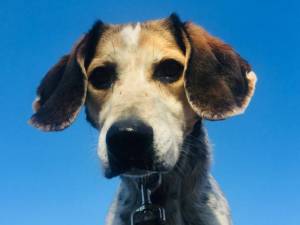 Gunther is a real character with so much potential! He would make an excellent training companion for someone interested in scent work or trick training. Gunther does have some worries around unfamili 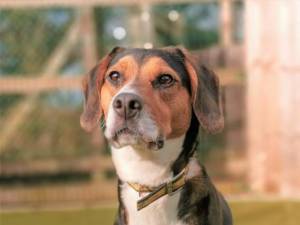 Daisy is a lively, inquisitive girl who has lived in a home previously but will need help with housetraining and being left alone. Daisy does suffer with seperation anxiety so will need owners who are 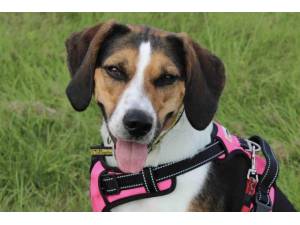 To apply to rehome Heidi, please click the 'rehoming me starts here' button below. Applications will close when a suitable match has been found, at which point she will be removed from the website. He

View all Harrier Dogs for adoption