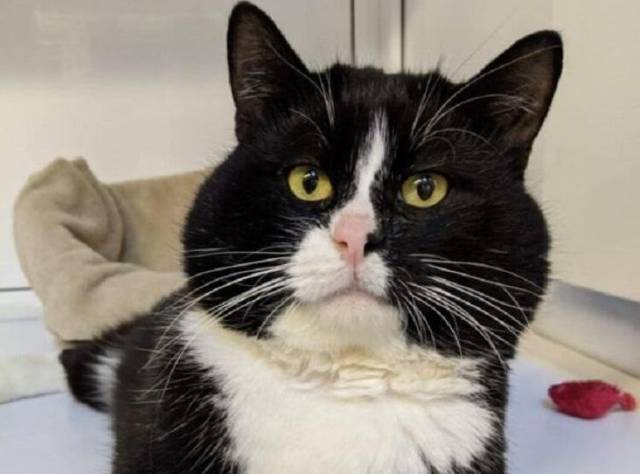 Cuddly Colin is a very affectionate boy! He would be fine with older children that aren’t too boisterous, and certainly no other pets.
Colin really has been through the wars. Collected as a stray with a badly broken leg, he went to the RSPCA’s animal hospital where he had to have his leg amputated. He was neutered at the same time.
Upon arrival with us, he had to go to the vets to have for a restitch. He had a tick removed from his head and a snap test was done: unfortunately, it came back positive for FIV. (Feline Immunodeficiency Virus.) If he had originally been neutered and vaccinated by his previous owner this would probably not be the case. Then we found out he had a test (that was not recorded on the paperwork) at the hospital but it was negative. So, we did a third test to be sure and again it was positive. So, we’re looking for a specialist home for him.
Information about FIV can be found here: https://www.rspca.org.uk/adviceandwelfare/pets/cats/health/fiv
Homes we would consider due to Colin being FIV positive:
NOTE : Being totally indoor-only may be considered as reducing his quality of life, since most FIV positive cats have previously been used to going outdoors. In some cases, being confined indoors can even cause stress, which may further lower their immune system.