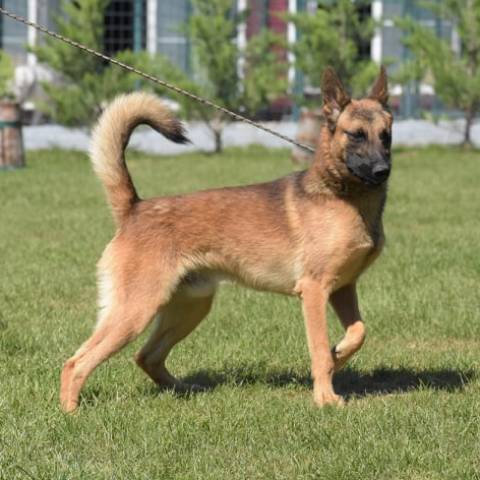 This boy will shortly be on his way to the UK from Macedonia, where he had a miserable early life. His conditions were so bad that he was seized by the authorities and rescued through a municipal Rescue, as far as I can understand. He had been kept on a short chain, never walked, and fed only bread scraps. Poor boy.

Everything changed for him, when he was removed, and he has been professionally housed, assessed and prepared for his new life in the UK. He has not just been fostered in some makeshift arrangement. He is used now to being handled by someone, who is knowledgeable, and he is clearly enjoying every moment of his new life. Little does he know that  there is more to come ...

We think that he is about two to three years old. He is described as being of 'nice build' with a 'cooperative' nature and 'good focus'. He is not aggressive at all to humans or older children and is good with female dogs. It is said that he is a dominant dog and can show this to other males. We have several videos of him with a young boy and one of him with other dogs, where he is almost being submissive. Maybe they are all females?

All in all Kai is a splendid boy with amazing presence and a special sort of star quality. He needs a home where he will be loved, above all, but one that can also engage his formidable intelligence and active temperament.

Do you measure up?