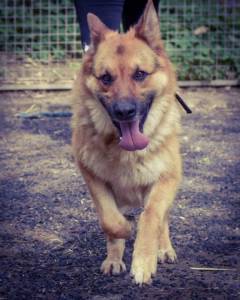 Update: May 2019 - Deacon is now under our care and although still living in a kennel and run, his life has improved tenfold. He’s such a lovely friendly lad with people, he clearly has not had much exposure to dogs and the outside world. He has been off lead with a few dogs, but will at points just have a pop.

Deacon needs someone who has the time to start lead training, he is reactive when on lead so needs to learn that he is safe and nothing going to get him.

URGENT:     Deacon needs to find a home urgently, he is living outside and is getting stones thrown at him by children which is winding him up and making him howl and bark.

He is living in far from ideal conditions and when our assessor met him Deacon just wanted some affection.

He feels that Deacon will be very excitable with human contact and does jump up and piddle when overexcited.

Other than that he was over friendly, he needs training and it probably won't take too much for him to become a wonderful family pet.

On lead, he will demonstrate over excited pulling which is understandable.   He also likes to carry his lead in his mouth.   As he has no history with children we will be looking at an adult home for him.